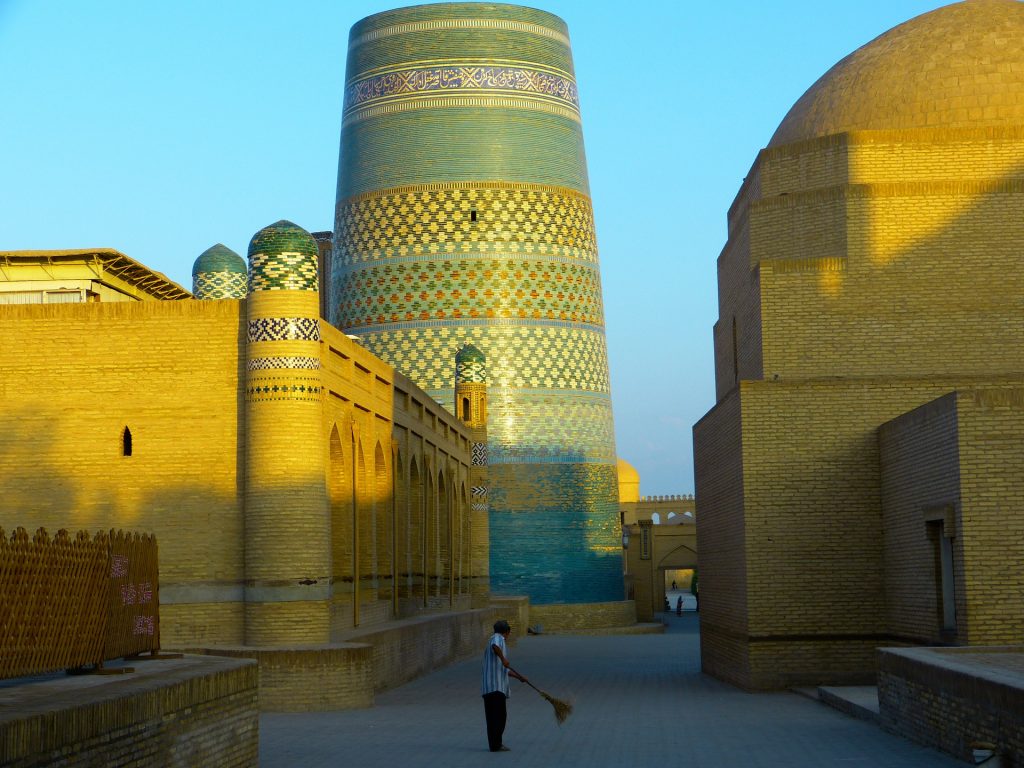 Background
Russia conquered Uzbekistan in the late 19th century. Stiff resistance to the Red Army after World War I was eventually suppressed and a socialist republic set up in 1924. During the Soviet era, intensive production of “white gold” (cotton) and grain led to overuse of agrochemicals and the depletion of water supplies, which have left the land poisoned and the Aral Sea and certain rivers half dry. Independent since 1991, the country seeks to gradually lessen its dependence on agriculture while developing its mineral and petroleum reserves. Current concerns include terrorism by Islamic militants, economic stagnation, and the curtailment of human rights and democratization.

Environment – Current Issues
shrinkage of the Aral Sea is resulting in growing concentrations of chemical pesticides and natural salts; these substances are then blown from the increasingly exposed lake bed and contribute to desertification; water pollution from industrial wastes and the heavy use of fertilizers and pesticides is the cause of many human health disorders; increasing soil salination; soil contamination from buried nuclear processing and agricultural chemicals, including DDT

Notes
along with Liechtenstein, one of the only two doubly landlocked countries in the world

Executive Branch
chief of state: President Islom KARIMOV (since 24 March 1990, when he was elected president by the then Supreme Soviet); head of government: Prime Minister Shavkat MIRZIYAYEV (since 11 December 2003); cabinet: Cabinet of Ministers appointed by the president with approval of the Supreme Assembly; elections: president elected by popular vote for a seven-year term (previously was a five-year term, extended by constitutional amendment in 2002); election last held 9 January 2000 (next to be held in 2007); prime minister, ministers, and deputy ministers appointed by the president; election results: Islom KARIMOV reelected president; percent of vote – Islom KARIMOV 91.9%, Abdulkhafiz JALALOV 4.2%

Overview
Uzbekistan is a dry, landlocked country of which 11% consists of intensely cultivated, irrigated river valleys. More than 60% of its population lives in densely populated rural communities. Uzbekistan is now the world’s second-largest cotton exporter and fifth largest producer; it relies heavily on cotton production as the major source of export earnings. Other major export earners include gold, natural gas, and oil. Following independence in September 1991, the government sought to prop up its Soviet-style command economy with subsidies and tight controls on production and prices. While aware of the need to improve the investment climate, the government still sponsors measures that often increase, not decrease, its control over business decisions. A sharp increase in the inequality of income distribution has hurt the lower ranks of society since independence. In 2003, the government accepted the obligations of Article VIII under the International Monetary Fund (IMF), providing for full currency convertibility. However, strict currency controls and tightening of borders have lessened the effects of convertibility and have also led to some shortages that have further stifled economic activity. The Central Bank often delays or restricts convertibility, especially for consumer goods. Potential investment by Russia and China in Uzbekistan’s gas and oil industry would increase economic growth prospects. In November 2005, Russian President Vladimir PUTIN and Uzbekistan President KARIMOV signed an “alliance” treaty, which included provisions for economic and business cooperation. Russian businesses have shown increased interest in Uzbekistan, especially in mining, telecom, and oil and gas. In December 2005, the Russians opened a “Trade House” to support and develop Russian-Uzbek business and economic ties.

Telephone System
general assessment: antiquated and inadequate; in serious need of modernization; domestic: the domestic telephone system is being expanded and technologically improved, particularly in Tashkent (Toshkent) and Samarqand, under contracts with prominent companies in industrialized countries; moreover, by 1998, six cellular networks had been placed in operation – four of the GSM type (Global System for Mobile Communication), one D-AMPS type (Digital Advanced Mobile Phone System), and one AMPS type (Advanced Mobile Phone System); international: country code – 998; linked by landline or microwave radio relay with CIS member states and to other countries by leased connection via the Moscow international gateway switch; after the completion of the Uzbek link to the Trans-Asia-Europe (TAE) fiber-optic cable, Uzbekistan will be independent of Russian facilities for international communications; Inmarsat also provides an international connection, albeit an expensive one; satellite earth stations – NA (1998)

Disputes – International
prolonged drought and cotton monoculture in Uzbekistan and Turkmenistan creates water-sharing difficulties for Amu Darya river states; delimitation with Kazakhstan complete with demarcation underway; border delimitation of 130 km of border with Kyrgyzstan is hampered by serious disputes around enclaves and other areas