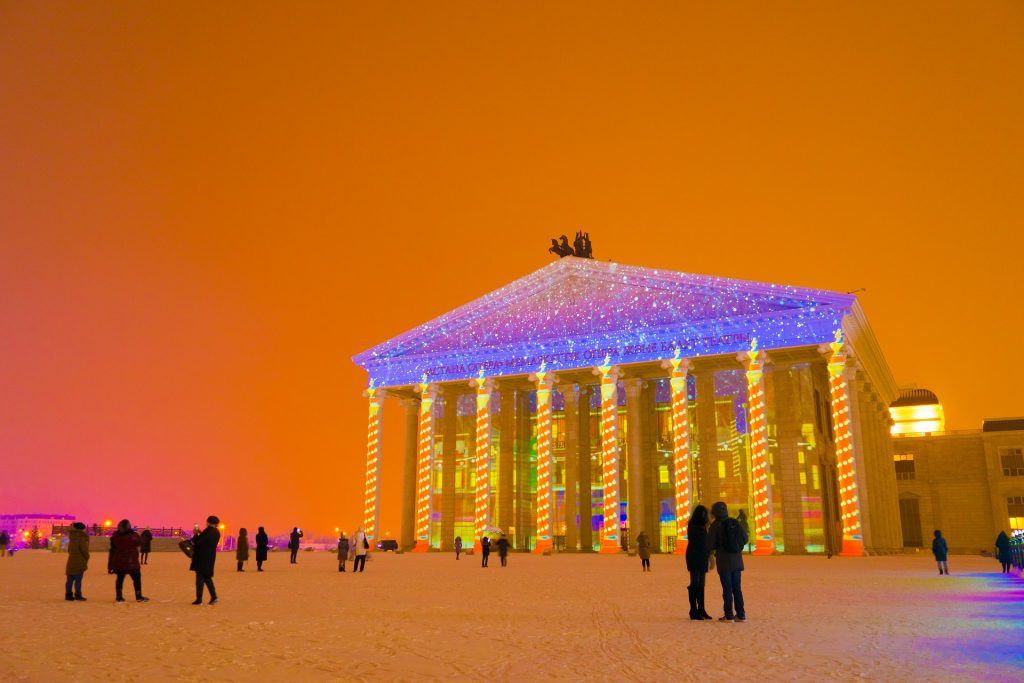 Background
Native Kazakhs, a mix of Turkic and Mongol nomadic tribes who migrated into the region in the 13th century, were rarely united as a single nation. The area was conquered by Russia in the 18th century, and Kazakhstan became a Soviet Republic in 1936. During the 1950s and 1960s agricultural “Virgin Lands” program, Soviet citizens were encouraged to help cultivate Kazakhstan’s northern pastures. This influx of immigrants (mostly Russians, but also some other deported nationalities) skewed the ethnic mixture and enabled non-Kazakhs to outnumber natives. Independence in 1991 caused many of these newcomers to emigrate. Current issues include: developing a cohesive national identity; expanding the development of the country’s vast energy resources and exporting them to world markets; achieving a sustainable economic growth outside the oil, gas, and mining sectors; and strengthening relations with neighboring states and other foreign powers.
» Geography
» People
» Government
» Economy
» Communications
» Transportation
» Military
» Transnational Issues

Natural Hazards
earthquakes in the south, mudslides around Almaty

Environment – Current Issues
radioactive or toxic chemical sites associated with former defense industries and test ranges scattered throughout the country pose health risks for humans and animals; industrial pollution is severe in some cities; because the two main rivers which flowed into the Aral Sea have been diverted for irrigation, it is drying up and leaving behind a harmful layer of chemical pesticides and natural salts; these substances are then picked up by the wind and blown into noxious dust storms; pollution in the Caspian Sea; soil pollution from overuse of agricultural chemicals and salination from poor infrastructure and wasteful irrigation practices

Capital
Astana; note – the government moved from Almaty to Astana in December 1998

Independence
16 December 1991 (from the Soviet Union)

Executive Branch
chief of state: President Nursultan A. NAZARBAYEV (chairman of the Supreme Soviet from 22 February 1990, elected president 1 December 1991); head of government: Prime Minister Daniyal AKHMETOV (since 13 June 2003); Deputy Prime Minister Karim MASIMOV (since 19 January 2006); cabinet: Council of Ministers appointed by the president; elections: president elected by popular vote for a seven-year term; election last held 4 December 2005 (next to be held in 2012); prime minister and first deputy prime minister appointed by the president; election results: Nursultan A. NAZARBAYEV reelected president; percent of vote – Nursultan A. NAZARBAYEV 91.1%, Zharmakhan A. TUYAKBAI 6.6%, Alikhan M. BAIMENOV 1.6%; note: President NAZARBAYEV arranged a referendum in 1995 that extended his term of office and expanded his presidential powers: only he can initiate constitutional amendments, appoint and dismiss the government, dissolve Parliament, call referenda at his discretion, and appoint administrative heads of regions and cities

Legislative Branch
bicameral Parliament consists of the Senate (39 seats; 7 senators are appointed by the president; other members are elected by local government bodies, 2 from each of the 14 oblasts, the capital of Astana, and the city of Almaty, to serve six-year terms; note – formerly composed of 47 seats) and the Mazhilis (77 seats; 10 out of the 77 Mazhilis members are elected from the winning party’s lists; members are popularly elected to serve five-year terms); elections: Senate – (indirect) last held December 2005; next to be held in 2011; Mazhilis – last held 19 September and 3 October 2004 (next to be held in September 2009); election results: Senate – percent of vote by party – NA; seats by party – NA; candidates nominated by local councils; Mazhilis – percent of vote by party – NA; seats by party – Otan 42, AIST 11, ASAR (All Together) 4, Aq Zhol (Bright Path) 1, Democratic Party 1 (party refused to take the seat due to criticism of the election and seat remained unoccupied), independent 18; note – most independent candidates are affiliated with parastatal enterprises and other pro-government institutions

Flag Description
sky blue background representing the endless sky and a gold sun with 32 rays soaring above a golden steppe eagle in the center; on the hoist side is a “national ornamentation” in gold

Overview
Kazakhstan, the largest of the former Soviet republics in territory, excluding Russia, possesses enormous fossil fuel reserves and plentiful supplies of other minerals and metals. It also has a large agricultural sector featuring livestock and grain. Kazakhstan’s industrial sector rests on the extraction and processing of these natural resources and also on a growing machine-building sector specializing in construction equipment, tractors, agricultural machinery, and some defense items. The breakup of the USSR in December 1991 and the collapse in demand for Kazakhstan’s traditional heavy industry products resulted in a short-term contraction of the economy, with the steepest annual decline occurring in 1994. In 1995-97, the pace of the government program of economic reform and privatization quickened, resulting in a substantial shifting of assets into the private sector. Kazakhstan enjoyed double-digit growth in 2000-01 – 9% or more per year in 2002-05 – thanks largely to its booming energy sector, but also to economic reform, good harvests, and foreign investment. The opening of the Caspian Consortium pipeline in 2001, from western Kazakhstan’s Tengiz oilfield to the Black Sea, substantially raised export capacity. Kazakhstan also has begun work on an ambitious cooperative construction effort with China to build an oil pipeline that will extend from the country’s Caspian coast eastward to the Chinese border. The country has embarked upon an industrial policy designed to diversify the economy away from overdependence on the oil sector by developing light industry. The policy aims to reduce the influence of foreign investment and foreign personnel. The government has engaged in several disputes with foreign oil companies over the terms of production agreements; tensions continue. Upward pressure on the local currency continued in 2005 due to massive oil-related foreign-exchange inflows.

Telephone System
general assessment: service is poor; equipment antiquated; domestic: intercity by landline and microwave radio relay; mobile cellular systems are available in most of Kazakhstan; international: country code – 7; international traffic with other former Soviet republics and China carried by landline and microwave radio relay and with other countries by satellite and by the Trans-Asia-Europe (TAE) fiber-optic cable; satellite earth stations – 2 Intelsat

Disputes – International
in 2005, Kazakhstan agreed with Russia, Turkmenistan, and Uzbekistan to commence demarcating their boundaries; delimitation with Kyrgyzstan is complete; creation of a seabed boundary with Turkmenistan in the Caspian Sea remains unresolved; equidistant seabed treaties have been ratified with Azerbaijan and Russia in the Caspian Sea, but no resolution has been made on dividing the water column among any of the littoral states

Illicit Drugs
significant illicit cultivation of cannabis for CIS markets, as well as limited cultivation of opium poppy and ephedra (for the drug ephedrine); limited government eradication of illicit crops; transit point for Southwest Asian narcotics bound for Russia and the rest of Europe